Domestic Violence: A sorrowful scenario of women in slum population of the Visakhapatnam City.

ABSTRACT
Women in slums are also no far to be the victims of domestic violence. The very issue was not recognized as a predicament among them as most of them are habituated to this kind of violence as a routine. Gender biased violence is identified as a major segment on Human rights agenda also, as domestic violence is a psychological, physical and social complexity every time.

INTRODUCTION
Domestic violence and abuse can be encountered by anyone and anywhere, yet the issue is always neglected. The affliction after facing the violence in the form of physical and psychological the trauma remains longer as they make the reasons secluded out of fear , shame ,guilt and moreover the attention towards their better half’s (1). For whatever the reasons, women are always found to be injured terribly at times, and some are killed for inept reasons (2) When the partner is an alcoholic or followed by other addictions also women still don’t intend to express their pain, some do complain and see the police for solutions but most of them stay in continuous distress (3,4)
The staid gap between the respondents, and the authorities through the health visitors or other volunteers was a predominant factor with inadequate awareness campaigns. It was reported that the prevalence of intimate partner violence as 10% -52% (5) illustrating the gender based violence.

METHODOLOGY
The questionnaire was made to interact with women population in the selected slums for a period of two months November and December 2018.145 were interviewed but only 109 provided the information to the questionnaire. Women are so protective about their families that it’s their responsibility not to reveal their life or issues for discussion.
There are several reasons for violence and sometimes no reason. Yet some characteristic information was drawn from them and the pathetic circumstances of women were understood. The respondents were married women in the age group from 18-50 years residing in urban slums. The questionnaire included information of them and their spouses, socio-demographic profiles, frequency of violence for the past years and their health in general. The objective was to know the motive of domestic violence among the sampled; therefore before the interaction the definitions and explanations of various violence’s were communicated. 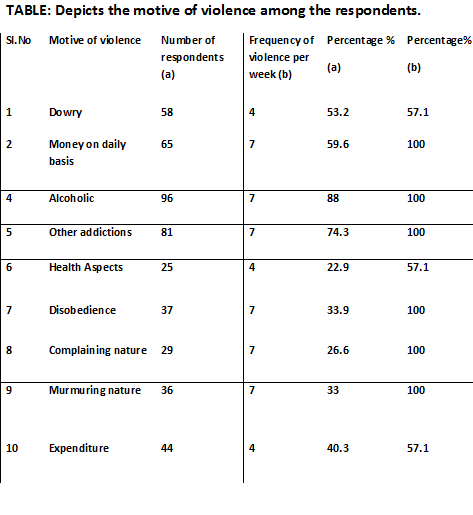 Chart Representation of the TABLE

Graphical Representation of the TABLE 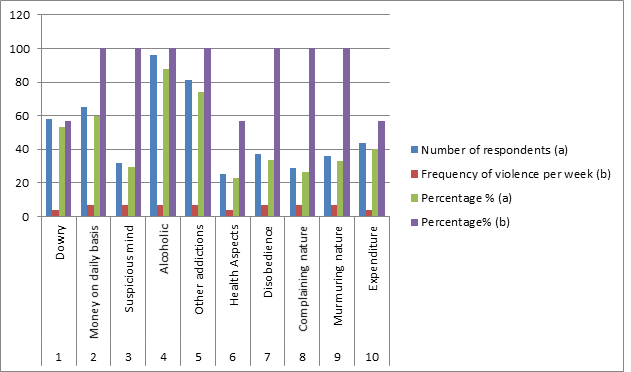 RESULTS AND DISCUSSION
The 109 sampled women population was counseled for some time after addressing them about domestic violence only few were prepared and others were reluctant to show the interest or reveal the facts.
Among the sampled population of 109, 58 respondents with 57.1% grumbled for dowry harassment after decades together. As he is a man and even now he can gets much dowry rather suffering with their miserable life with wives. Some claim that the parents of the women have deceived of gifting those lands and gold and to get everything back from the old parents. There was continuous harassment to get the dowry from parents.
They need money every day for various reasons, to drink or other addictions daily with 65 (59.6%) were suffering every single day. Most of the men have irregular life, where in need money every day to cry for some time for their misfortune to live with them.
Suspicious mind was one of the motive for the entire ruckus every day, 32 women with 29.3%were tortured among the sampled. Alcoholism was more in 96 with 88% is one of the menaces in and around slums. The addictions pose a continuous and serious demand for money and after the task they hit them for any reason or no reason.
Other addictions were 81 women with 74.3% also compel the women no less then alcoholism as they react violent against their wives without any control. Health aspects as reason among sampled was very pathetic, as some of the sampled population; Of 25 with 22.9% five women were sick patients suffering with chronic ailments but still beaten by husbands and twenty women after expression of their discomfort, illness they do not consider then and hit them. Women with disobedience 37 (33.9) towards intimate partners is the most worst nature as they can’t tolerate the fighting back nature out of their egoistic nature.
Complaining nature among 29 women with 26.6% was the other irritating factor for men as they don’t want their wives to complain for any reason rather support is expected by the partner though they were wrong.
Murmuring nature of women 36 with 33% is the stupid nature in terms of men as few express their anger by yelling on them, but most of them murmur in low voice so that they can escape from the beatings and controlling their anger. But they are bothered by this nature of women and react violent. The expenditure in their house was the other reason for violence among the slum women as all the time men need money for themselves and not interested or responsible for their duties, therefore when women spend money at home they find it to be a reason to be angry and violent.
The frequency of violence per week was considered along with motive of violence and the results were surprisingly high with pathetic situation. Most of the motives of violence like dowry, money on daily basis, suspicious mind, alcoholics, other addictions, health aspects, disobedience, complaining and murmuring nature, and for expenditure in house chores intended for domestic violence were for seven days, whole week, 24/7, every day it’s so sad to know their situations. For motives like dowry the harassment was for four days per week with 53.2% and per week with 53.2% for health aspects respectively.

CONCLUSION
The women in slum population were reluctant to provide the information as they felt that they disrespect their husbands through the interaction. Later, after explanation most of them provided. The motive is strong in the men population for any or no reason also they vent their anger and psychic attitude on the women makes their life miserable. Most of them as explained were in pathetic situations with poverty, illiteracy, and also were victims of domestic violence. There is an urge to control as it is not only women being victims, its children and society being punished for no reason.
ACKNOWLEDGEMENT
Hepsibah Palivela, one of the authors is recipient of Dr. S. Radha krishnan Post-Doctoral Fellowship in Humanities and Social Sciences and grateful to UGC, New Delhi, India.
REFERENCES
1. Koenig MA, Stephenson R, Ahmed S, Jejeebhoy SJ, Campbell J. Individual and Contextual Determinants of Domestic Violence in North India. Am J Public Health. 2006;96:132–8. [PMC free article] [PubMed] [Google Scholar]
2. Thompson RS, Bonomi AE, Anderson M, Reid RJ, Dimer JA, Carrell D, et al. Intimate partner violence: Prevalence, types, and chronicity in adult women. Am J Prev Med. 2006;30:447–57. [PubMed] [Google Scholar]
3. Hepsibah Palivela,P.V.V.Prasada Rao(2018). Disability and psychosomatic agony among elder women in slums of Andhra Pradesh. International Journal of Research and Analytical Reviews, Volume 5,Issue 2, April-June 2018.
4. Garcia-Moreno C, Jansen H, Ellsberg M, Heise L, Watts C. WHO multicountry study on women’s health and domestic violence against women. Geneva: WHO; 2005. [PubMed] [Google Scholar]
5. Heise L, Ellsberg M, Gottenmoeller M. Population Reports, series L, No. 11. Baltimore: Johns Hopkins School of Public Health, Population Information Program; 1999. Ending violence against women. [Google Scholar].