Female education in India is not a gift of modern civilization. India has always been a relentless champion of the cause of women at all international and national front. The policy makers have become conscious that real development cannot take roots if it bypasses women, who represent the very essential part around which social change must take shape. The past few years have seen unprecedented changes in the political, diplomatic, economic and ideological spheres, but certainly a lot of developments have also taken roots. From growth to growth with equity, from economic development to human development and from services endowment to empowerment, the paradigms of development have certainly come a long way .The development of women in India – who according to the 2011 census represent 48.46 per cent of the country’s population – has occupied the centre-stage in our development planning since independence. In this study, an attempt has been made to identify the female enrollment and employment of teachers in school education in Andhra Pradesh. Several strategies were adopted to promote education of girls as an integral part of the planned socio-economic development of the country. The removal of women’s illiteracy and obstacles inhibiting their access to and retention in primary education will receive over riding priority, through provision of special support services, setting of time targets and effective monitoring. The Data indicate that the participation of Women Teachers has been increasing. The index of female teachers recorded a much higher increase than that of the male teachers. This may be due to implementation of 33.33 per cent of reservation policy in Andhra Pradesh in favour of women. It is concluded that unless all the ladies are totally educated we cannot expect them to play any effective role in the society.

The enrollment of girls has increased at a faster rate than that of boys at primary, upper primary and also secondary stage. During our study period (1959-60 to 2014-15) the Annual Compound Growth Rate of enrollment of girls was 10.25 per cent as against 0.87 per cent of boys in primary stage. The corresponding figures were 9.04 and 6.34 in upper primary stage and 6.83 and 2.88 in secondary stage respectively. The foregoing analysis shows that during the whole period of 45 years after formation of the state of Andhra Pradesh, the growth rate of enrollment of girls has been higher than that of boys. It shows clearly in Table – 3. 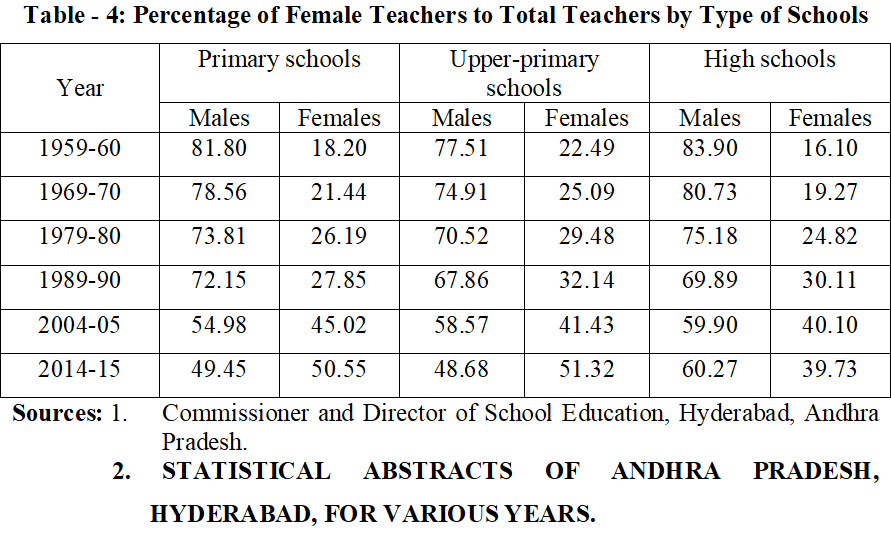 During the period of our study (1959-60 to 2014-15) the Annual Compound Growth Rate of female teachers was 3.79 per cent as against 0.83 per cent of male teachers in primary schools. The corresponding figures were 7.39 per cent and 5.29 per cent in upper primary schools and 6.32 and 3.41 in high schools respectively. These data indicate that the participation of women has been increasing. It shows clearly in Table -5.

To repeat, the number of women teachers reached an all time high at primary, upper primary and high school stage in 2014-15. The number of both male and female teaches in primary, upper primary and high schools shows as increasing trend over the period of our study. It is particularly noteworthy that the index of female teachers recorded a much higher increase than that of the male teachers. This may be due to implementation of 33.33 per cent of reservation policy in Andhra Pradesh in favour of women.
Conclusions and Suggestions:
At the time of the formation of the state, females were way behind males in terms of educational attainments, as elsewhere in the country. This is not a surprise given the cultural taboos that come in the way of educating females and given the son preference that is so glaring in our society. However, as time passed by, females made rapid progress especially in school education, the constitutional provisions and special efforts at the state level coming in handy. A process has set in motion where by the gap between males and females in literacy rate is getting reduced, the growth rate of enrollment of girls at the school level is exceeding that of boys, the gender disparity index is fast decreasing and, more importantly, large number of females are taking to teaching in schools. Though women share is about fifty per cent in the total population, their involvement in the education system is quit far far behind. Mother as the first teacher of the child, herself being an illiterate and one cannot expect miracles from her. It is a shame that we have kept mother India illiterate, ignorant and second grade citizen of the society. Unless, all the ladies are totally educated we cannot expect them to play any effective role in the society.
Therefore, it is time that we concentrate on women education as a first priority. If resources are scarce it is highly advisable that the women educational needs are satisfied first.
References:
1. Altekar, A.S. (1951): Education in Ancient India (fourth edition), Nan Inshore and Bros., Banaras (variance).
2. Chalam, K.S. (1988): Education and weaker sections, Inter India Publications, New Delhi.
3. Chalam, K.S. (1993): Educational policy for human resources development, Rawat Publications, Jaipur,
4. Gopinathan Nair, P.R. (1981): Primary education, population growth and socio-economic change, Allied publishers, New Delhi.
5. Government of India (1969): Education and national development, NCERT, New Delhi.
6. Naik, J.P. (1975): Elementary education in India – A promise to keep, Allied Publishers, Bombay.
7. NCERT. (2000): National curriculum framework for school education, New Delhi.
8. Nurullah, S. And Naik, J.P. (1943): History of education in India during the British period, MacMillan, Bombay.
9. Pulla Rao, D. (1998): Economics of primary education, Rawat Publications, Jaipur.
10. Rajaiah, B (1987): Economics of education, Mittal publication, New Delhi.