Nutrition is the process of providing or obtaining the food necessary for health and growth. The health of women is linked to their status in the society. Malnutrition poses a variety of threats to women. It weakens women’s ability to survive childbirth, makes them more susceptible to infections, and leaves them with fewer reserves to recover from illness. Malnutrition undermines women’s productivity, capacity to generate income, and ability to care for their families.

Women are more likely to suffer from nutritional deficiencies than men are, for reasons including women’s reproductive biology, low social status, poverty, and lack of education. Sociocultural traditions and disparities in household work patterns can also increase women’s chances of being malnourished. Globally, 50 percent of all pregnant women are anaemic, and at least 120 million women in less developed countries are underweight. Research shows that being underweight hinders women’s productivity and can lead to increased rates of illness and mortality.

Many women who are underweight are also stunted, or below the median height for their age. Stunting is a known risk factor for obstetric complications such as obstructed labour and the need for skilled intervention during delivery, leading to injury or death for mothers and their newborns. It also is associated with reduced work capacity.

Adolescent girls are particularly vulnerable to malnutrition because they are growing faster than at any time after their first year of life. They need protein, iron, and other micronutrients to support the adolescent growth spurt and meet the body’s increased demand for iron during menstruation. Adolescents who become pregnant are at greater risk of various complications since they may not yet have finished growing. Pregnant adolescents who are underweight or stunted are especially likely to experience obstructed labor and other obstetric complications. There is evidence that the bodies of the still-growing adolescent mother and her baby may compete for nutrients, raising the infant’s risk of low birth weight (defined as a birth weight of less than 2,500 grams) and early death. 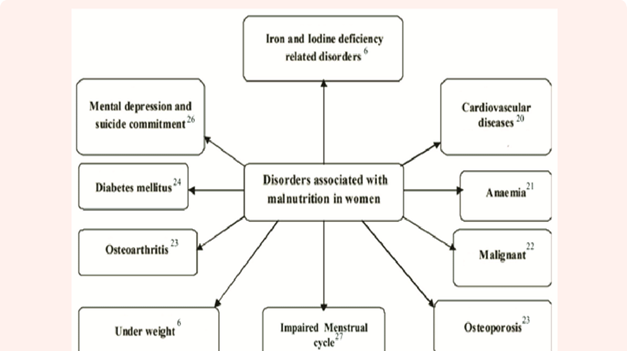 Iron deficiency and anaemia are the most prevalent nutritional deficiencies in the world. The body uses iron to produce haemoglobin, a protein that transports oxygen from the lungs to other tissues in the body via the blood stream, and anaemia is defined as having a haemoglobin level below a specific level (less than 12 grams of haemoglobin per decilitre of blood [g/dl] in nonpregnant women; less than 10 g/dl in pregnant women).4 Most women who develop anaemia in less developed countries are not consuming enough iron-rich foods or are eating foods that inhibit the absorption of iron. However, malaria can also cause anaemia and is responsible for much of the endemic anaemia in some areas. Other causes of anaemia include hookworm and schistosomiasis, HIV/AIDS, other micronutrient deficiencies, and genetic disorders.

Anaemia affects about 43 percent of women of reproductive age in less developed countries. Women are especially susceptible to iron deficiency and anaemia during pregnancy, and about half of all pregnant women in less developed countries are anaemic, although rates vary significantly among regions.5 Iron deficiency and anaemia cause fatigue, reduce work capacity, and make people more susceptible to infection. Severe anaemia places women at higher risk of death during delivery and the period following childbirth.6 Recent research suggests that even mild anaemia puts women at greater risk of death.7

Failing to meet the body’s iodine requirements impairs mental functioning and can cause goitre (a swelling of the thyroid gland) and hypothyroidism, a condition marked by fatigue and weakness. Among adolescent girls, iodine deficiency may cause mental impairments, impede physical development, and harm school performance. Although programs to iodize salt have reduced the prevalence of iodine deficiency disorders dramatically in the past 10 years, there is still wide variation in household access to iodized salt, ranging from 80 percent in Latin America to 28 percent in Central and eastern Europe. At least 130 countries have serious pockets of iodine deficiency disorders.

VAD, which can cause growth retardation and impaired vision, remains a significant public health issue among populations that do not consume enough vitamin A, which is found in animal products and certain fruits, including mangos. Severe VAD causes blindness; less severe VAD impairs the immune system, making people more susceptible to infection and putting them at increased risk of death. Concurrent infection with parasites and illnesses such as diarrhea, as well as having several pregnancies too close together, can exacerbate VAD. Pregnant women are especially vulnerable to VAD. In Nepal, for example, where VAD is prevalent in some communities, as many as one in 10 pregnant women experience night blindness due to VAD. 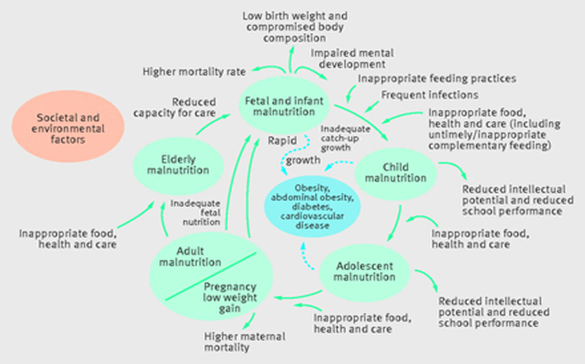 Malnutrition in women leads to economic losses for families, communities, and countries because malnutrition reduces women’s ability to work and can create ripple effects that stretch through generations. Countries where malnutrition is common must deal with its immediate costs, including reduced income from malnourished citizens, and face long-term problems that may be related to low birth weight, including high rates of cardiac disease and diabetes in adults.

The Millennium Development Goals established by the UN member states in 2000 challenge nations to create effective interventions to improve women’s and adolescent girls’ nutrition. Taking such action not only improves the health of girls and women today, it has far-reaching intergenerational effects that can help countries develop.

Preventing malnutrition requires a political commitment. Public health systems need to prevent and treat micronutrient deficiencies, encourage households to meet the dietary needs of women and adolescent girls throughout their lives, and ensure their access to high-quality health services, clean water, and adequate sanitation. Policymakers should also address women’s low social status and ensure that girls have access to education — which should include information on nutrition. Such policy measures can help increase women’s age at first pregnancy, an important determinant of maternal health and child survival, and can encourage women to space their births.

Adequate nutrition is important for women not only because it helps them be productive members of society but also because of the direct effect maternal nutrition has on the health and development of the next generation. There is also increasing concern about the possibility that maternal malnutrition may contribute to the growing burden of cardiovascular and other noncommunicable diseases of adults in less developed countries. Finally, maternal malnutrition’s toll on maternal and infant survival stands in the way of countries’ work towards  key global development goals.