A CASE OF EXTERNAL INTERVENTION IN LIBYA 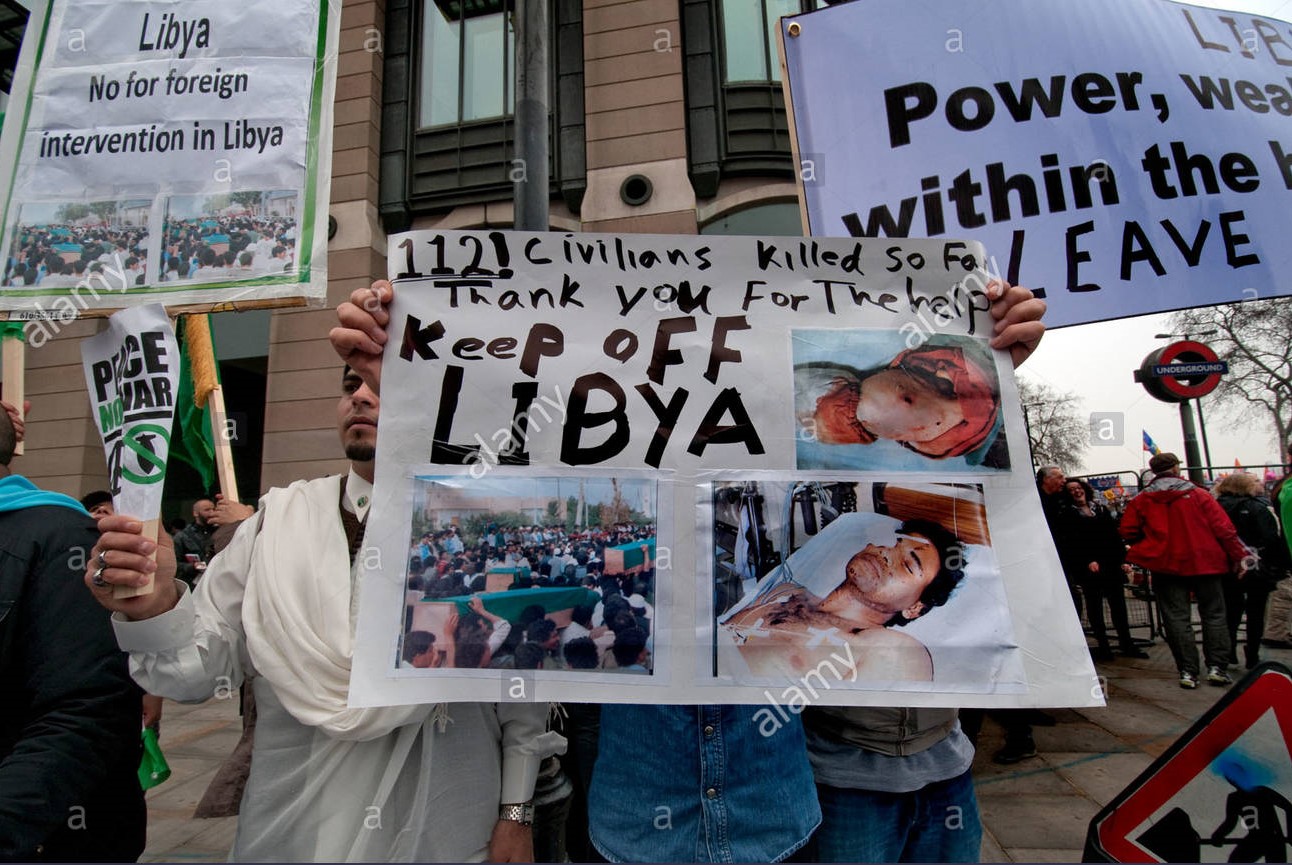 The policy of interventionism is pursued by the hegemonic powers like the USA and its powerful European alliance to serve their interest. The anti-west activities of Libya made it USA’s bêtes noirs. Libya was one of the prime spots of western interventionist policy in Africa. Although interventionism is not about direct involvement only, it has other indirect strategies too, such as economic sanctions, supporting the opposition groups, empowering the rebels with weapons and creation of a buffer zone in the neighborhood. In the case of Libya, the intervention had different objectives, not only ending Qaddafi’s rule, but oil resources were also part of their interest. Rule of Qaddafi was not admirable, but his removal made Libya even worse and fragmented than before. Presently, the terrorist groups like Al-Qaeda, ISIS are functional after the ouster of Qaddafi. There was also the Humanitarian perspective on the intervention in Libya. Though the idea of ‘responsibility to protect’ was humanitarian, but the way it was used is questionable. Another consequence of interventionism resulted in fragmentation of political, economic and social structure in Libya. The only positive effect of the intervention was the conduction of democratic elections. In the above context, the paper aims to explore the factors responsible for the intervention in the name of humanitarian purpose. Further, this paper will establish the difference between the causes proposed for intervention by using the UNSC platform and reality with original outcomes of intervention in Libya.

Introduction
Interventionism in the 20th century has become a significant issue of debate in the world community. It has evolved as the never-ending practice in international politics. The idea of non-interventionism has been approved by many International Relations theories as one of the major norms of a global society. Wight says “in principle, every state is independent in the management of its own affairs and foreign interference is a violation of its rights. In practice, intervention occurs commonly and adherents of every political belief will regard intervention as justified under certain circumstances. Post second world war period has witnessed a huge number of interventionist incidents during the cold war era. Allied forces became dominant in the post-war era and ideological, geostrategic importance and economic interest motivated them to intervene in other nations.
The USA has been the greatest specialist of the interventionism in both cold war and post-cold war era. End of the USSR made the USA a hegemonic power and world became Uni polar after the end of the cold war. There is no doubt about the capability of the USA to intervene in the south to make its political and economic will fulfilled. The other Western powers like France and UK has set many examples of intervention, particularly in Africa as they have enjoyed long-term colonial rule in the African region. The foreign policies of these powers provide glimpses of the interventionism. As a part of global hegemonic actors, their action invites the debate on interventionism on different grounds.

The idea of Responsibility to Protect

The idea of legitimate intervention developed properly in the post-cold war era and was the result of emerging military intervention. According to Hoffmann “well before the end of the Cold War, ‘if one cannot control intervention, one can at least speculate…If interventions, like wars, are here to stay, perhaps all one can do is pontificate… to write guidelines distinguishing between what is legitimate and what is not??”. It is quite interesting that major intervention after the post-cold war portrayed humanitarian. The case of Kosovo, East Timor, Somalia, and Bosnia was occurred to stop the violation of human rights.

The idea of “responsibility to protect” is about the measure, which basically concerned for the elimination of any kind of violation and participation in the activities of atrocities. It is developed to fix the situation of human rights violation in the countries facing violence against humanity. The major concern was to deal with situations like genocide, ethnic conflict, war crimes and a crime against humanity. In 1990 s atrocities occurred in Rwanda and Balkan, and the global community could not take adequate measures to stop the violence. Later military actions of NATO in Kosovo invited criticisms for violation of international law, and use of force. Incidents like this attracted debate on this issue that how could the international community can prevent the violation of human rights by following the international norms.

In the 1990s the annual report presented in the UNGA, Kofi Annan said “the prospects for human security and intervention in the next century” and challenged the member states to “find common ground in upholding the principles of the Charter, and acting in defense of common humanity”. By presenting 2000 millennium report, he said that “if humanitarian intervention is, indeed, an unacceptable assault on sovereignty, how should we respond to a Rwanda, to a Srebrenica, to the gross and systematic violation of human rights that offend every precept of our common humanity?”. Francis Deng’s said “state sovereignty as a responsibility” and affirmed the idea that “sovereignty is not just protection from outside interference – rather is a matter of states having positive responsibilities for their population’s welfare, and to assist each other”.

Report of ICISS mentioned all qualifying details of ways for implementing “humanitarian duties” concerned with anticipation and elimination of the issue of conflicts and future reconstruction, with the involvement of all important players by adopting measures to prevent oppressive acts. Three realities can be seen in the nature of the global conflict. First, “arbitrary territorial demarcation ignoring the ethnic-tribal fabrics in the colonial societies”. Second, “Cold-War encampment containing the functional interface between the political regimes and the citizenry and restricting the demographic cohesion in the post-colonial societies”. Last, “increasingly selective unilateral post-Cold War interventions or threat of such interventions of the supra-state actors, led by the extra-regional powers, into the Global South in the name of international mandate”.

International changes after the civil war can be seen in terms of the emerging debate over the nature of intervention that took place in Libya under the leadership of western powers. They intervene in Libya on the name of humanitarian measures and expected that humanitarian intervention would be accepted by the world community, but sharp criticisms were received as other powers like Russia, China, Germany, and Brazil made allegations about the intervention, that in the name of human security, western powers were fulfilling their interest in Libya through NATO actions. Responsibility to protect is a principle of intervention. Reason for naming it responsibility to protect is for action to prevent the cases of human crisis. Western powers played a crucial role in Libya according to their interest but western power’s intervention made Libya a defunct state.